I was asked to design a pirate ship float, the float will be part of various parades in the Tampa Bay area most notably the Gasperilla Day parade in February of each year. This parade typically draws 500,000 people.

These are the preliminary sketches that have to based on an existing float platform.

first one is overall float.

I am not sure what the height requirements or restrictions that you will have but basically a large treasure chest in the front, mast in the middle and stern of ship in... well the stern. 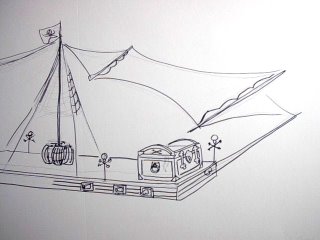 So in the front the treasure chest is a walk in piece. The four sides are constructed to look like a treasure chest and you can stand inside it and throw out beads or whatever. There would be a walk thru doorway space ('passage way' in navel jargon) to go in and out of the chest.

This could be a really nice piece if you take the time and build it right and paint it up with some metallic paint and all. I would imagine the construction company could find some large metal pieces to simulate latches, etc.

Help by the participating members to get accessories to simulate treasure and that draped over the lid and leaning up against it.

the sides of the float could be wood or that hardiboard and nailed on to simulate the side of a ship with areas for the cannons.

The mast in the center of the ship is surrounded at the base with powder kegs. I was thinking that this would provide a seating area for a rest.

Then you could make a sail and install it so it covered the front part of the ship to provide sun shade and rain protection. It attaches to a mast going out the front of the ship.

Now this is reallllllllllllllllllly cool. On the posts that line the perimeter of the float you could get life size human skulls plastic models and mount them on the top of each post. You could also get femur bones and cross them below the skulls. 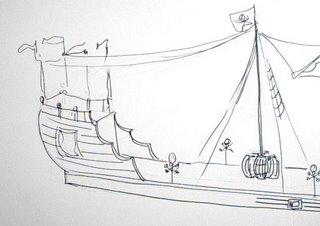 I think it needs to be curved out like the sketch. Again I don't know the height restrictions but it would be cool to have a platform on top to stand and throw beads also.

What will make the float outstanding is the accessories you use on it.
lost of rope rigging and poles with multi colored flags, etc. Will add tons of 'look' with not much cost.

anyway this is my initial thoughts and I will do more detailed sketches of the individual aspects if asked. (Depending on budget)