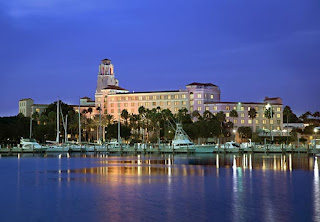 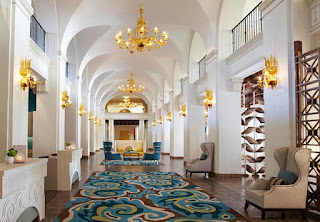 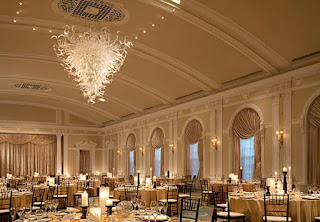 This great resort was originally completed in 1925.  It florished for many decades before closing.  After 30 years and 110 million dollars the entire structure was completely renovated and modernized then reopend to great fanfare in 1992.  Since then “Grand Lady of the Bay” has enjoyed world wide recognition for excellence.
There are several restaurants in the Vinoy.  Guests enjoy fine dining at Marchand's and this is where I come in.  The walls in Marchand's originally displayed a mural.  During the restoration the lower portion of the mural was recreated after extensive repairs to the plaster and structure of the walls.  On the walls above the columns you can see the part of the mural which was restored.  The mural part above that area was covered up by panels. 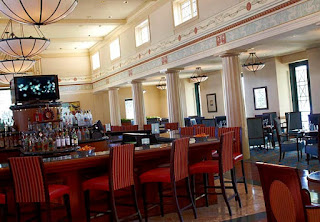 Tom Stovall is the artist who headed up the team that recreated the mural 20 years ago.  At either end of the restaurant the Vinoy now wants to take down the panels and restore that part of the original mural underneath them so they contacted Tom to see if was available for the project.  He agreed to take on the project and contacted me to work with him.
This project has been in the works for several months but just within the last 2 weeks Tom and I have started to work on it.  The first phase of the project is to faithfully record the original mural areas which are to be restored.
In the photos below you can see either end of the restaurant with the panels taken down.  The area to be restored is 4 feet high and 36 feet wide.  The area needs plaster repair and other prepatory work before we can actually put any paint on the walls. 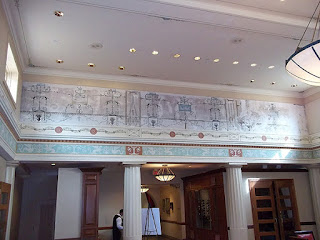 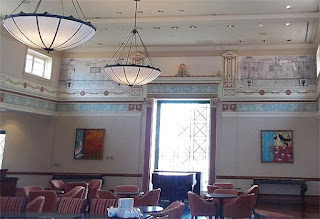 There is a lot of detail in the mural so keeping that in mind we approached this project carefully documenting every detail of the original image.  More in the next post about how we documented the artwork.