This is post 2 about the mural restoration of The Vinoy Renaissance St. Petersburg Resort & Golf Club, a five star resort located on the waterfront in downtown St. Petersburg, Florida.

In order to go forward with the Vinoy mural restoration the existing and original mural had to be documented in detail.  The main reason being the wall on which the mural is painted needs to be patched and resurfaced and that process will mean the mural itself will be coverd up.  So we had to make sure a complete documentation was achived.  Basically we photographed and did a series of actual tracings of each image in the mural while taking measurements as to the exact positioning of the mural elements on the wall.

So when we begin to recreate the mural we now know where on the wall each element goes and with the tracings and photographs will be able to recreate faithfully the mural.

As an example here is a photo of one of the sections.  You can kinda see where the plaster is falling off certain areas and the original paint has chipped off and faded. 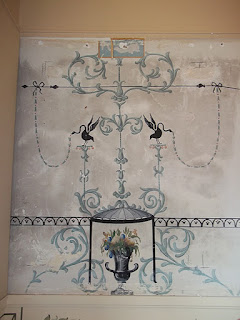 Now in order to recreate the mural as faithfully as possible we are going to use a series of silk screens to get the basic shape and design up on the wall.  Then we will hand paint in the details and shading and highlights.
Here is a photo of one of the tracings with the image painted in with black. 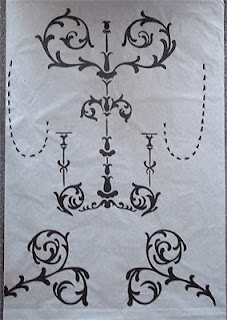 So the process will be mostly hand painting but supplemented where appropriate with screens.