Wall Mural at the Vinoy

Here are some photographs of the Renaissance Vinoy Resort & Golf Club in St. Petersburg mural.


The part of the wall Tom Stovall and I have recreated from the original mural of 1925 has been covered up for 20 years. When it was uncovered we discovered the plaster was all in bad shape and large parts of the mural where just gone. So we photographed what was left and actually put tracing paper on the wall and traced out the various parts to make sure we could repaint it exactly as it was and in the exact same positioning. Then the walls were replastered and painted.  Tom and I then started our restoration of the mural with a blank white wall. I have made some very minor adjustments but that is all. One thing both Tom and I agree on is after a while we both began to appreciate what a great job the original artist did. He really did a masterful job in designing the mural.


First look is the whole mural from ground level. It's 36 feet across and the part we restored is 4 feet high.  You can see the orange scissor lift in the lower left of the photograph.   We had access to two scissor lifts and without those it would have been a major struggle to accomplish this project. 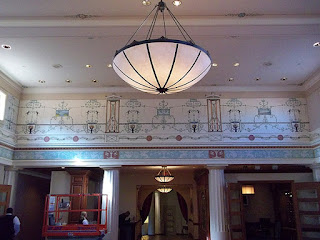 The next photograph is a shot of the center section of the mural. What we restored is the part that starts with the fruit bowls and up from there. The part below that with the round discus and vine and then below that with what we called the mythical creatures was done by Tom Stovall 20 years ago when the resort received the 110 million restoration of the entire property. At that time the decision was made to place panels over the upper part of the mural  (the part we just restored) keeping in mind that at some future date it would be restored. 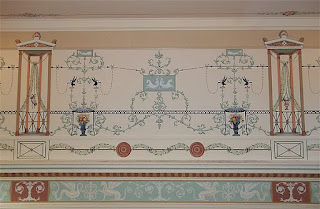 The next is the right side of the mural.  One of the many interesting features of this mural is that in the center area of the right and left side there is a 9 by 18 inch Florida landscape painting.  I was able to recreate these based on the photographs we had taken. 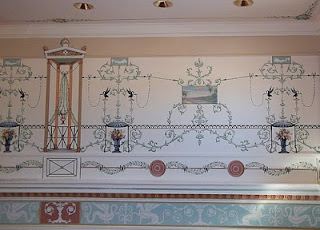 And finally the left side. 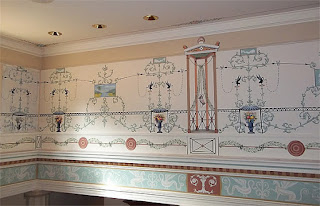 This next shot is very interesting. On the right is the part we restored and on the left is the original from 1925.  The Vinoy is considering leaving this panel exposed with a sign that says '1925' and then putting a corresponding sign on the restored part saying '2012'. 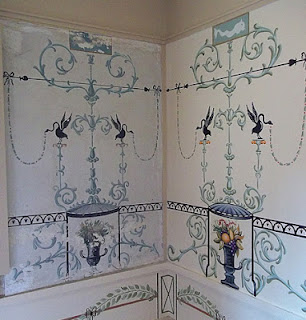 Couple of shots looking down the wall from up on the lift. 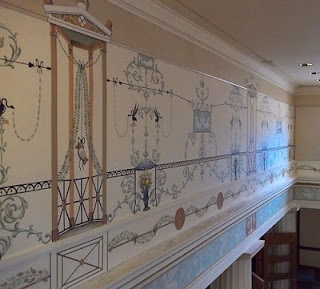 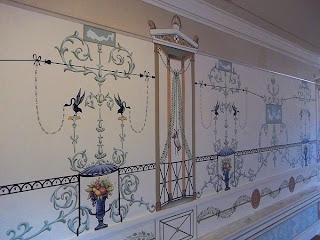 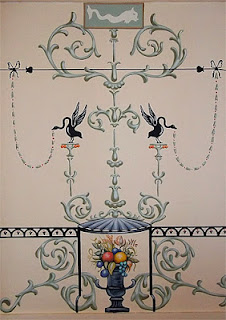 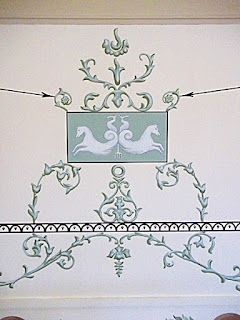 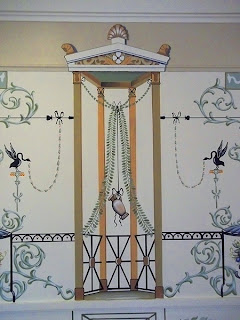