I create original murals but sometimes I am called upon to repair or repaint a mural that another artist has created.  This is one of those cases.  The home is getting a total renovation and a couple of the ac vents were removed and then the hole that was left was patched and retextured.

In the first picture you can see where there was a 24 inch square return vent that was removed and the wall patched.  This is just one small section of a much larger mural in a hallway area.  The larger sections on either side of the hallway area about 8 feet long.  the ceiling is arched and the mural goes all the way from one side to the other.  But you can see the obvious need to repaint this section of the mural. 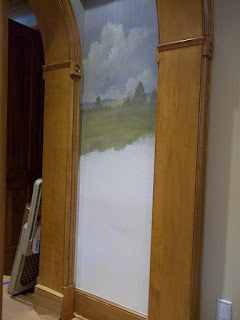 In this next photograph it shows the opposite side of the hallway in the same area.  So my job is to match this side with the other where the ac vent used to be. 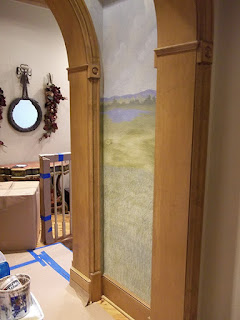 The next photograph shows what I was able to create.  The first challenge of this type of work is that you have no idea of the actual colors that where originally used so you have be able mix up the greens and blues to match the rest of the mural.  The second challenge is to make mural look like the same hand painted it.  So I have to be able to simulate the original artist's brush strokes to do that.  I think I did a good job with both of the challenges this job presented.  You really can't see but in the bottom section of the work there is about a million brush strokes depicting the grass. 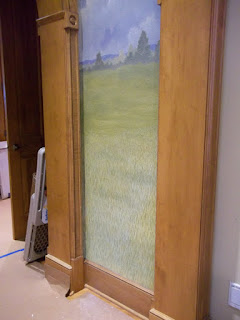 I also repaired a ceiling area in the living room.  Again there was an ac vent there that got removed and so when the ceiling was patched the patched area needed to be painted to match the rest of the ceiling.  The square areas with the cross in them are about 30 inches on a side.  The center one is the one I painted to match the rest of the ceiling.  Doing this has the same challenges as the mural.  I first had to figure out what the base coat color was and then the color wash over that and the right color brown for the swirling design that someone had done.  In the picture you can see there are still two of the new pieces of wood that need to be stained but other than that it is a perfect match. 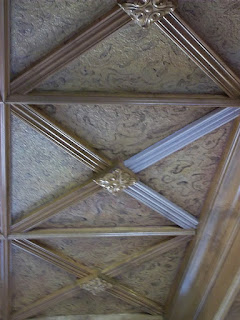