This photo shows the extent of the deterioration of the surface paint on the doors.  It has cracked and chipped off.  The backside of the doors had no chipping off but did have some minor cracking here and there.  The wood itself was in great condition, it was just the paint job that had failed. 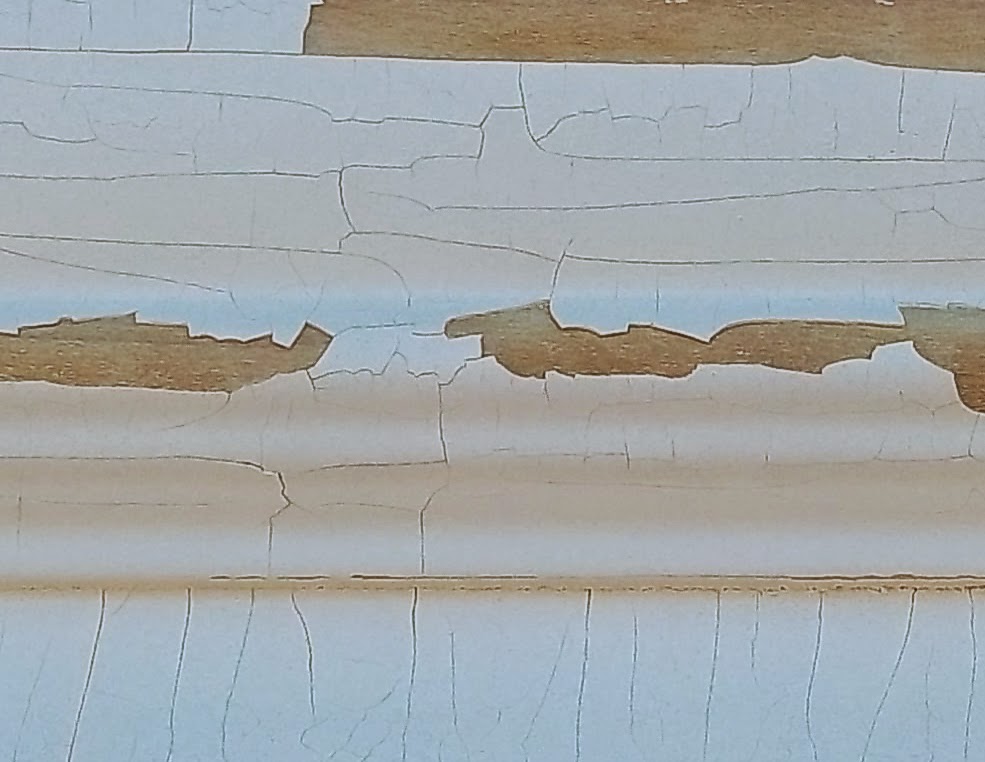 So what to do about that?  I could only think of two choices, one is to simply replace all the cabinets, the other choice is to go with it and use what you have but make the cabinets distressed in areas where they were not thereby creating a more cohesive look for the whole kitchen.

You might think, "Wait a minute Bob, how about sanding down and repainting?"  First of all look how thick that paint job is.  Then on top of that the existing paint job was cracked all  over so you would actually have to strip off all the paint down to the bare wood.  IMO that is not anywhere near feasible.  The only way to do that that I know of is to immerse the doors into a chemical bath of sorts which runs the risk of ruining the wood itself.  So it is really not an option.  Besides it might be more expensive than buying new doors or cabinets, and after they were stripped you would still have to repaint them.

In the next photo you can see the extent of the chipping on the doors.  You can't see the cracking from taking a picture this far back but it's there also. 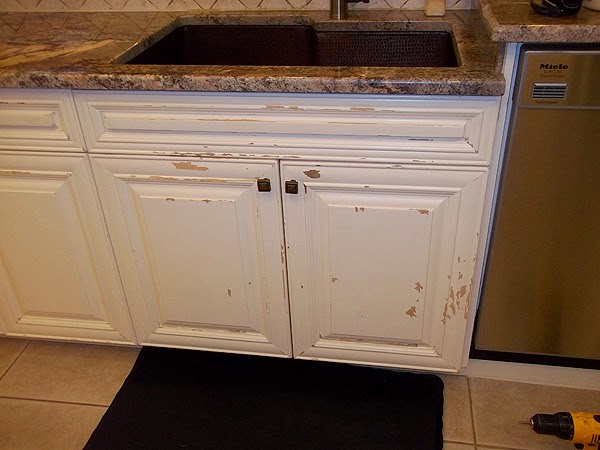 Now of course not all the cabinets where as bad as those above.  That section is actually the worst.  On the other side of the kitchen the existing paint was not chipping hardly at all but still cracked.  You can see in the next photo that they don't look too bad, just some little chips here and there but like I said, still the cracking but very subtle on most of those doors, but sooner or later the rest of the cabinets doors will most likely have started to chip away also. 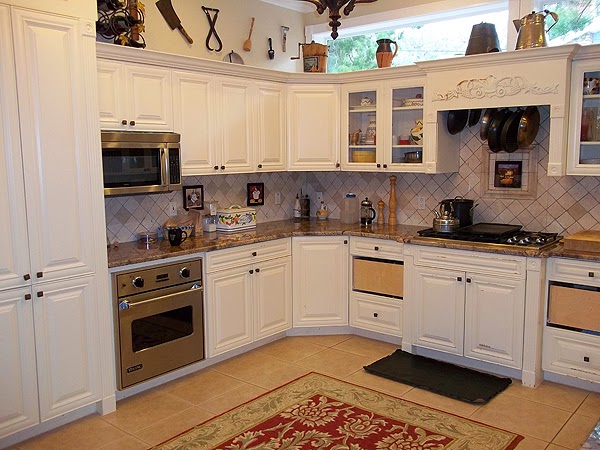 The other thing is you want all the cabinets to have the same look.  So my proposal was to distress the kitchen cabinets uniformly. In order to make all the doors uniform and cohesive I had to take the doors and frame work that were not chipped and had minimal cracking and make them look like the doors that were chipped.

I am going to show you a sequence of photos that explains the steps involved.  The first one is one of the doors that basically was ok. 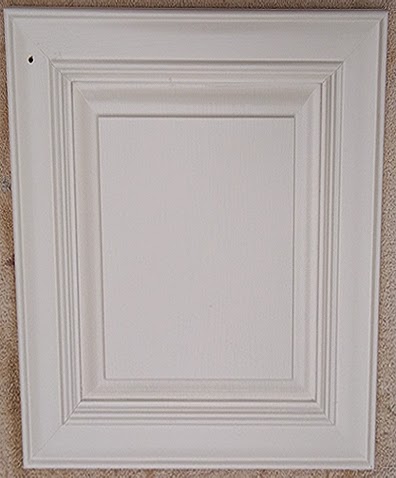 The first thing I did was create a natural chipping out in various areas of the door.  In step one I used a putty knife to scrap off the paint.  I didn't want to create chipping all over but just a few areas to get the idea across that the paint is chipping off.  I used a the putty knife or scraper instead of sandpaper because I wanted the chip offs to look natural.  If I had used sandpaper to sand thru the paint to the wood that's exactly what it would have looked like, like I had sanded it instead of looking like the paint had chipped off. 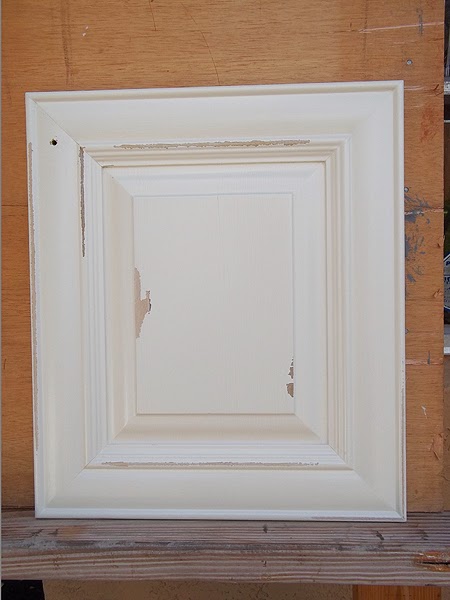 In step 2 I then applied the paint and wiped it back off until just a very thin film was covering the center panel.  I taped off around the center panel so I wouldn't get any paint on any other areas.  In the photo below you can see how there is very little paint involved in the final look. 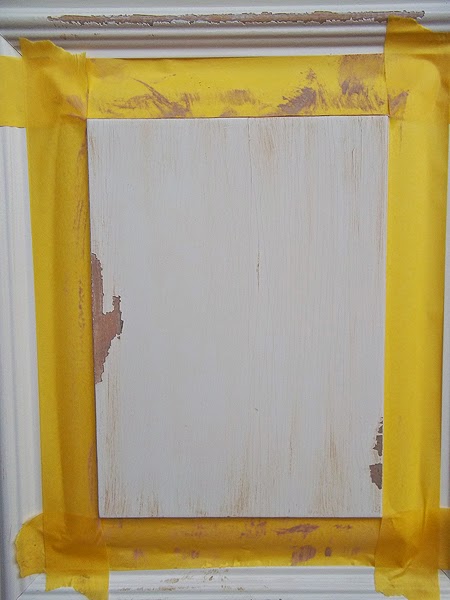 In step 3 I will paint on the vertical areas on either side of the center panel.  Again I tape off the areas to make sure I don't get any over painting on the places I don't want it.  The picture below shows how I have taped off the vertical areas but before I have painted on those areas. 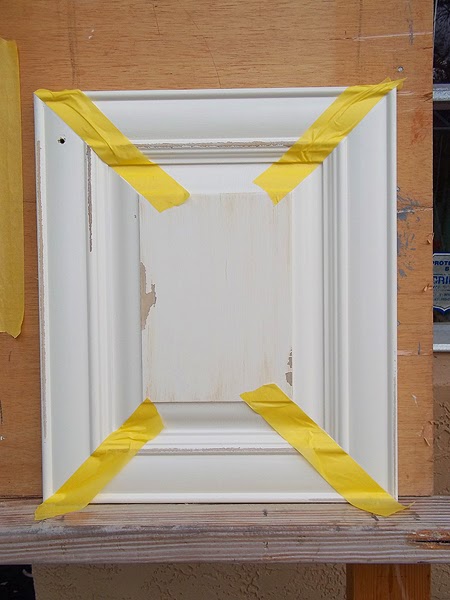 In step 4 I paint in the horizontal areas above and below the center panel.  In the photo below you can see how I have painted in the vertical areas and the top horizontal area.  I still have the bottom horizontal to paint that is why it is still taped off. 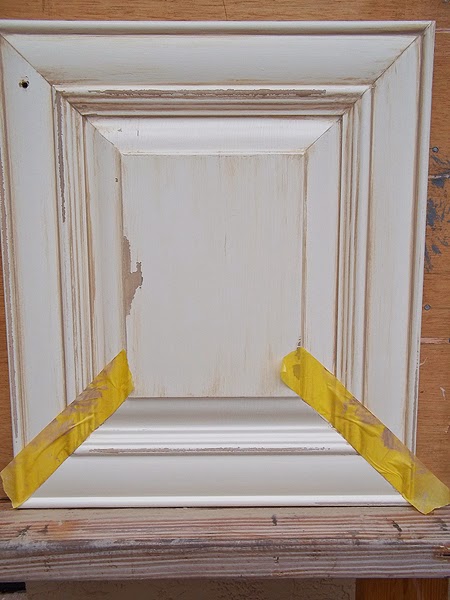 The next photo shows the completed door. 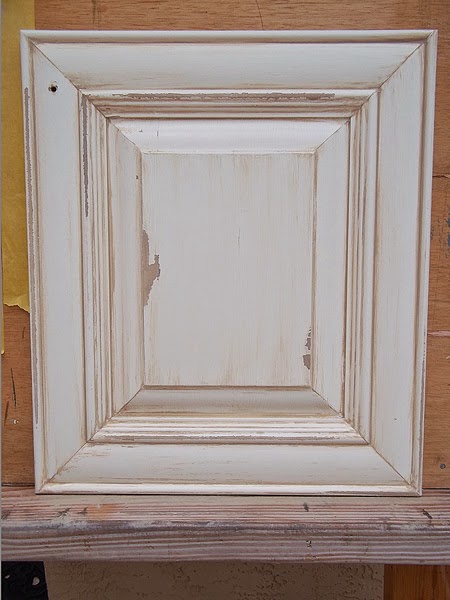 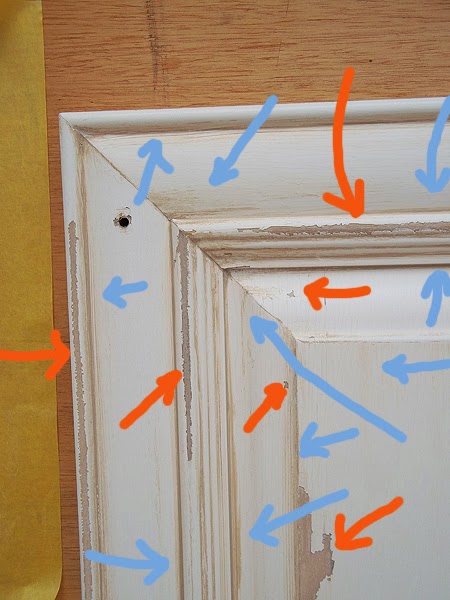 The next photo is a great before and after of the same door. 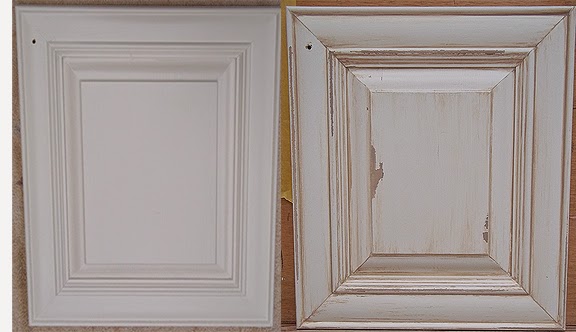 So for all the kitchen cabinets I created the same look by working on the doors that had no chipping and the frame of the cabinets.

Here is a series of the completed project. 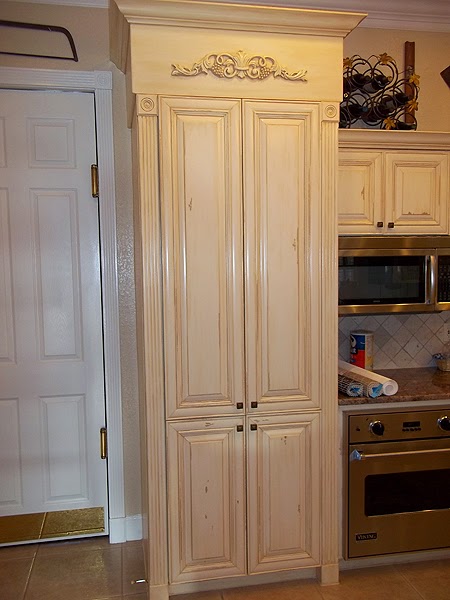 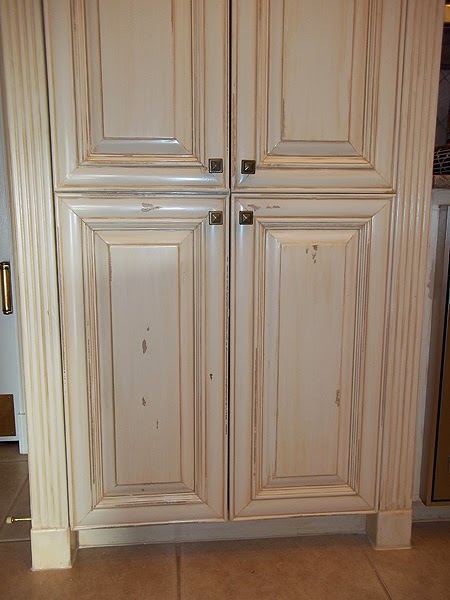 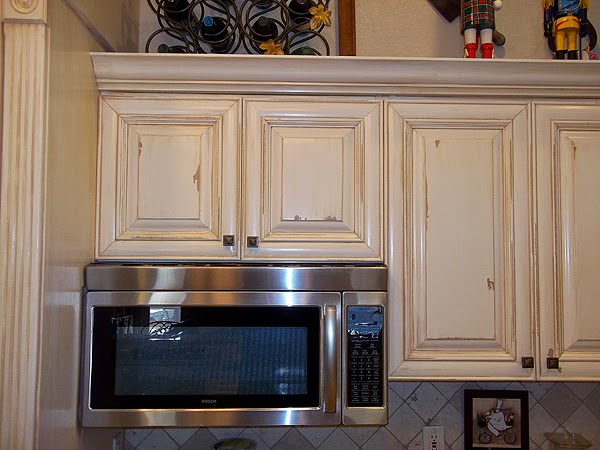 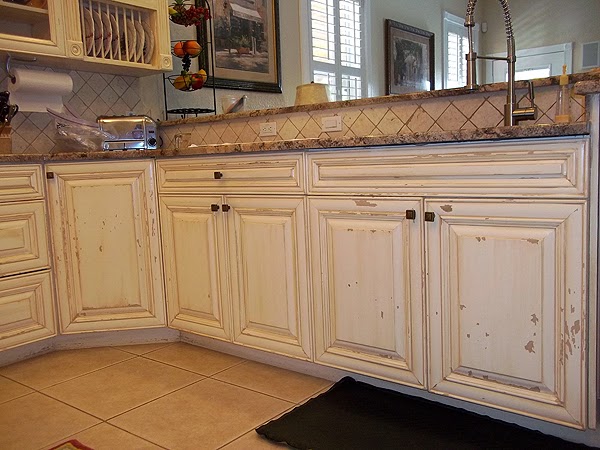 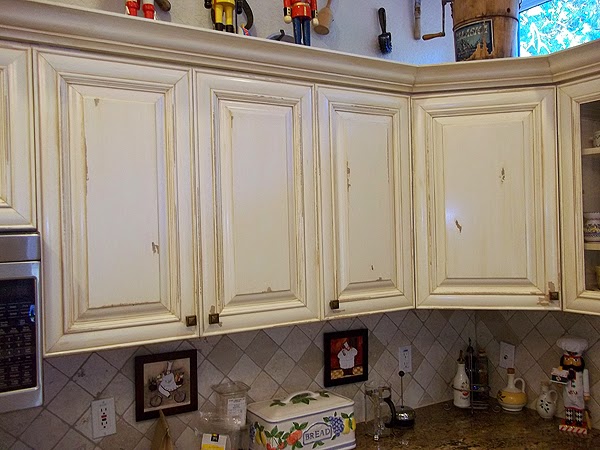 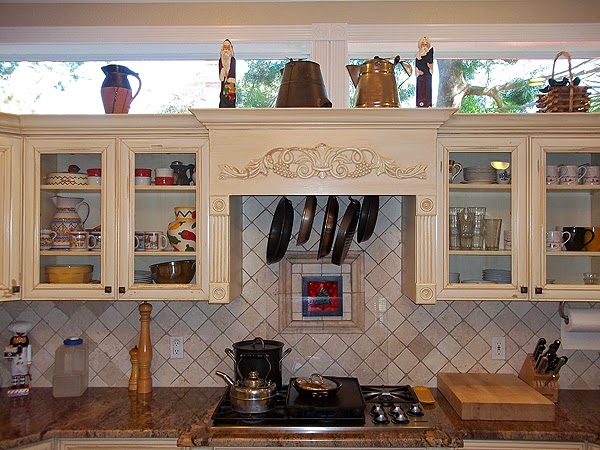 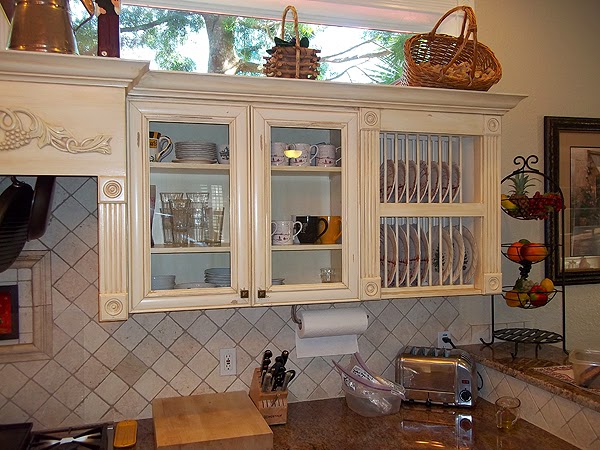 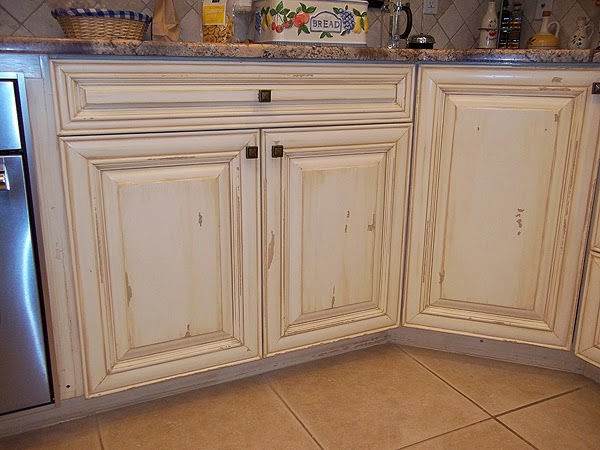 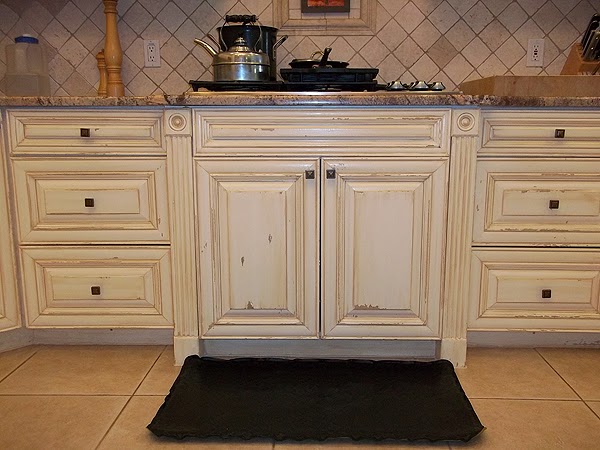 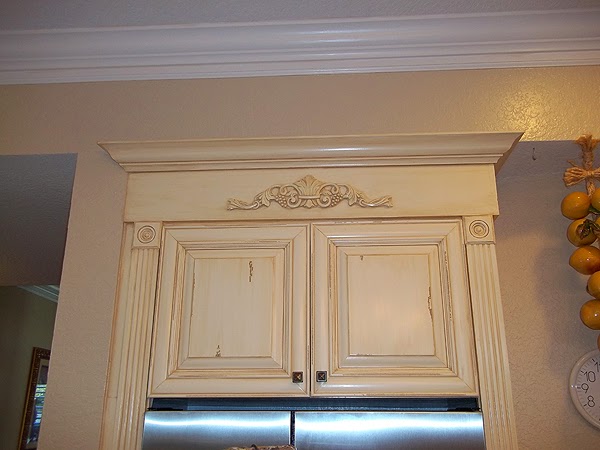