Woodworkers have been around for a long time.  In fact woodworking is the oldest profession irregardless of what you my have heard. Starting with Homo erectus 2.5 million years ago the legacy of mankind has been built on the back of working with the most versatile of all natural materials, wood.

The Schoningen spears made by Neanderthals 340,000 years ago.

A milestone in woodworking is the invention of the javelin.  For over a million years early human species had been using wood spears for hunting and defense against predators.  These where called 'thrusting spears' and as the name implies were held and used to jab and thrust towards prey and against predators in defense.

Then someone along the line got the great idea of throwing it.  Eureka!  A whole new world opened up.   Turns out that the Neanderthals could make javelins with stone tools to almost the exact same specifications than modern day long-distance javelins are made to. This greatly increased the ability to defend and feed themselves.

If you would like to know the full story on the development of the throwing spear check out my post here on my Anthropology blog. 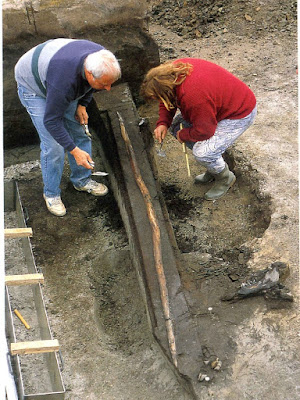