The second phase when creating my ancient spiritual symbols is to let them dry out.  This takes about two weeks.  The day before I fire them for the first time I take them outside and let them sit in the sun for 4-8 hours and get any residual moisture out that might be left.  This first photo shows them laying  out baking in the sun.  I have 71 various symbols there. 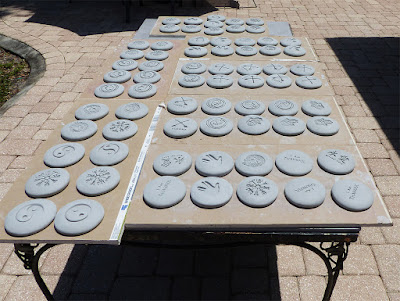 Once I get dried I load all of them in the kiln.  70 or so is about my limit.  I could get more in there but I only like dealing that many at once.  One aspect of firing the kiln is you want to have good air flow around the pieces.  To do this I have a fan attached on the bottom of the kiln and there are some small holes in the kiln floor.  There are also small holes in the lid so when the fan is on it draws a very small amount of air into the kiln and thru it which gets exhausted from the bottom.  This gets different gases from the clay out that are released in the firing process.  The next photo shows how I have started to load the kiln. 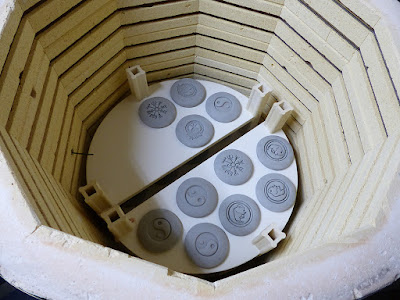 When doing a bisque firing you can lay the clay right on a kiln shelf and it will not stick to it.  When doing a glaze firing you do not want any of a glazed piece of work to rest on a shelf.  I'll get more into that in a subsequent post.
I have a digital kiln controller.  For the bisque firing I have a customized firing programed into which ramps up the kiln slowly to 200 degrees and then stays there for 4 hours.  This ensures that any moisture at all left will be cooked out.  The kiln controller has a nice digital readout showing the temperature after you turn it on and will show every degree increase in temp during the firing cycle.  Here I just turned it on and it was a 86 degrees. 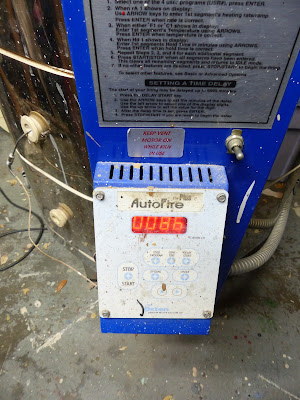 After the 4 hours of hold time at 200 degrees the program then ramps the kiln up to 1,945 degrees, again it's a slow ramp and takes about 12 hours. 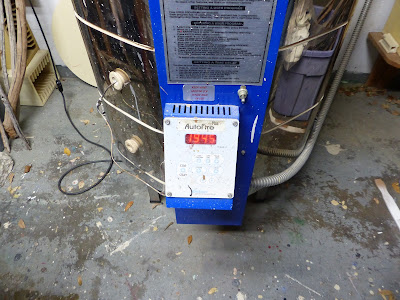 Once it reaches the 1,945 degree temp (called the firing temp) it shuts off.  At that point the kiln needs to cool off below 200 before I will open the lid.  The exhaust fan helps cool it down but it still takes about 15 hours.  It is critical not to open the lid when the kiln is so hot.  The room temp air flooding into a hot kiln would cause the clay to explode and probably ruin the kiln also.
The next photo shows the clay before and after firing.  You can see how the color changes pretty dramatically from the grey to the white, hence the name white earthenware. 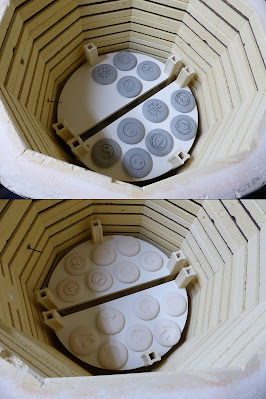 Once the temp is below 200 I pop the lid and let things cool off to the point where I can pick them up by hand, typically another 4 hours.  Then I will unload the kiln.
A side by side comparison of bisque fired clay and the before bone dry clay.

This Native American friendship symbol is a new symbol for me.  I also created two other new symbols for my etsy shop, both Native American.  One is the White Buffalo and the other is the Sun symbol. 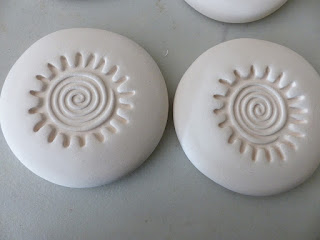 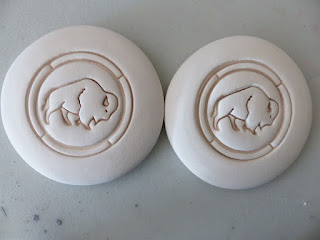 Here are the new Native American symbols laid out ready to move on to phase three which is the glazing phase. 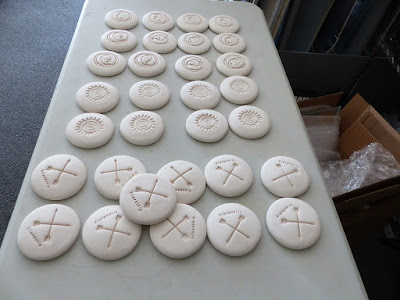 I have an idea of the colors I want to try out so I'll do a sample of each one to make sure I like the finished pieces.  I will write about the glazing in my next post.